Sunfree Lighting Limited is a high-tech company specialized in R&D and production of solar LED lights and LED lighting.

The power generation rate will be decreased if the solar panel accumulation of dust, but if the frame has mud zone will decrease generation exceed more than 90%.

- In the traditional operation and maintenance robot cleaning work, 90% of the time is to clean the floating dust, but the frame with mud may require additional manual cleaning

- In the traditional manual cleaning work, 90% of the time is to clean the mud zone, even need additional equipment

- The drainage desilter solves the dust accumulation on the frame, so that many solar power stations have less cleaning and even no cleaning

The solar panels of low-inclination photovoltaic power plants most time are flat display on the roof, the installation inclination is 0-5 degree, rain、 snow、 dew、 frost、 clean water and dust are easy to collect at the bottom edge of the framed components. After the water evaporates, a clear mud zone is formed, which adversely affects the power generation and service life of the power plants.

2、The formation principle of mud zone

＊ Rainwater washes the surface dust to the bottom edge of the framed components.

＊ External factors such as wind, vibration, and gravity make it easier for dust to accumulate on the bottom edge of the framed component

＊ The height difference between the module frame and the glass forms a step, which prevents dust and muddy water from flowing out of the frame and accumulates near the frame. After he water evaporates, a mud zone formed.

3、The damage of mud zone

※ Cause the mud zone form a “Heat Spot”, serious will make a fire damage

※ Cause Anti-Reflection( AR) Coating film oxidize and then form a irreversible “rainbow”.

3.1、Decrease the power generation capacity of the solar module 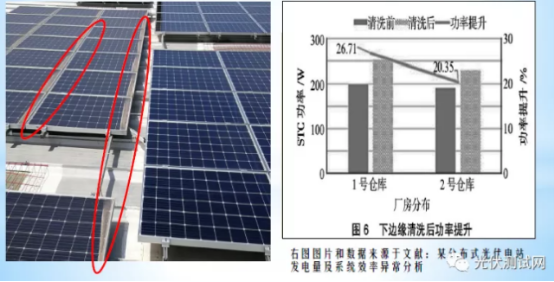 Glass is prone to hydrolysis under high temperature and high humidity conditions, thus generated sodium hydroxide corrodes the coating layer on the glass surface, and the generated silicic acid gel is attached to the glass surface. At the same time, ultraviolet rays have a greater destructive effect on some of the ionic bonds of the substances in the coating. The simultaneous action of these two factors aggravates the damage of the coating film in the accumulation of water and dust area, thus forming a “rainbow pattern”, which causes the attenuation value of the effective solar transmittance in this area to increase.

3.4、Accelerate the aging of solar modules at the mud zone, speed to form PID effect

＊ The “heat Spot” in the mud zone will fast speed this are aging.

3.5、The mud zone is easy to accumulate oil

The commercial photovoltaic power plants are most in the industrial area or traffic busy places, the concentration of organic matter such as automobile exhaust gas, industrial exhaust gas, and boiler fuel oil in the air in a local area is high, and it is easy to accumulate in the dust deposit on the surface of the component.  Along with the rainfall forms a mud zone and organic matter accumulates in the mud zone, then combines with the glass anti-reflection film to form stubborn oil stains. Mud can be cleaned off, but oily stains is difficult to clean. 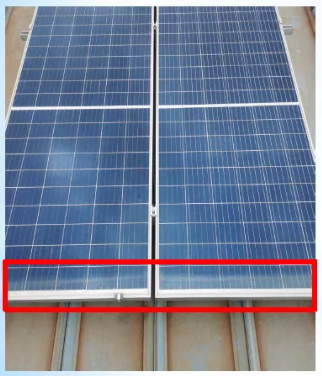 Roof climbing to do cleaning is hard and not safe